Vegan cinnamon roll muffins make for a perfect healthy on-the-go breakfast. Made with only clean ingredients, these cinnamon muffins are great for kids or an afternoon snack, too!

I made something magical that you have GOT to recreate asap…

I made these super easy and delicious muffins after work last week and they left the apartment smelling like heaven. Pretty much anytime cinnamon sugar is involved you can count me in! If you feel the same you’ll def want to check out my Bananadoodles.. aka vegan and gluten free snickerdoodles.

Whenever I’m about to start baking I have the hardest time deciding what form of baked good I want. If you follow me on instagram, i’m sure you’ve seem me run a million polls asking for ideas or suggestions. 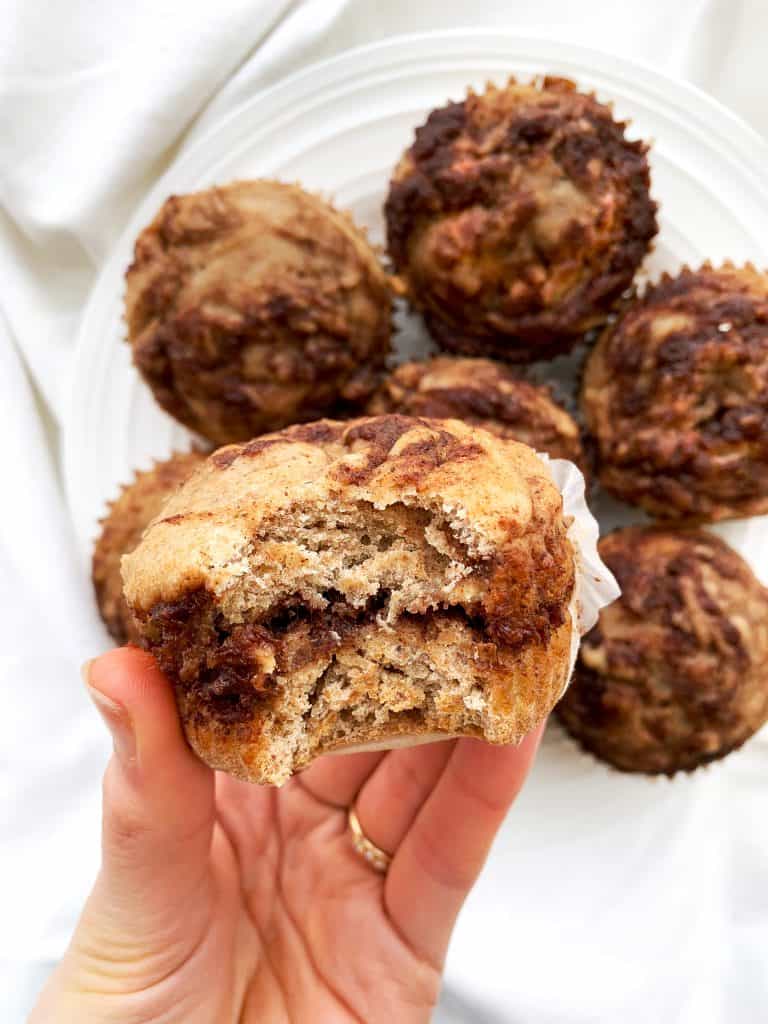 Do I want muffins? Cookies? Brownies? Peanut butter cookie dough cups!? There are so many options to choose from that for this recipe I just decided to combine two of my favorites: cinnamon rolls AND muffins.

After all, who doesn’t love cinnamon rolls? My only issue with them is how messy they can get. I figured turning them into muffin form would allow me to enjoy this delicious sweet treat without the mess!

And boyyyy was I right 🙂

I made these vegan cinnamon roll muffins using:

For my flaxeggs I use bob’s red mill ground flaxseed meal. I use 1 TBSP ground flaxseed meal and 3 TBSP water for one flax egg. I stir it up in a small bowl and let it sit for 5 minutes to thicken. You will just double this to make two flax eggs for your vegan cinnamon roll muffins!

WHAT YOU NEED FOR THE CINNAMON ROLL MUFFINS:

If you call yourself a muffin fan you have GOT to check out these Dark Chocolate Sweet Potato Muffins or my Peanut Butter Double Chocolate Muffins, too!

Hope you all enjoy these easy vegan muffins as much as we did! And don’t forget to tag me on instagram when you make them!

Previous Vegan Double Chocolate Avocado Cookies | How to Swap Butter for Avocado
Next How To Upgrade Your Yogurt Bowl | Turning Ordinary Moments Extraordinary With Oikios Oh!

Healthy Snickerdoodle Muffins Made with Applesauce